As early as 1791, the Spanish explorer Jose Maria Narvaez sighted Point Atkinson. One year later, Captain George Vancouver entered Burrard Inlet, and met with the First Nations residents of Holmulchesun, a Coast Salish settlement at the mouth of the Capilano River.

Aside from merchants trading with the First Nation people, West Vancouver remained undisturbed. However, the opening of the Pioneer Mills in 1863 and the subsequent lumber trade led to a boom in real estate speculation. The Municipality of North Vancouver, which included West Vancouver, was incorporated in 1891 with a population of 300. By 1912, sufficient settlement warranted the incorporation of the District of West Vancouver, with Charles Nelson as the first Reeve. West Vancouver was officially incorporated on March 15th, 1912.

Early development in the area occurred in small coastal communities such as Hollyburn, Dundarave, Caulfeild, and Horseshoe Bay. Canneries, logging, and a small amount of farming provided livelihood for the few year-round residents. Rough terrain precluded further industrial development, and getting to or around the Municipality was difficult. But, a private ferry service, established in 1909, soon provided regular access. Train service was initiated in 1914, but a road connecting all of these communities was not completed until 1926.

The 1926 Town Planning Act set the future pattern for the community by banning new industry, limiting commercial development to specific pockets, and establishing large lot sizes. In the 1930's, the area's unspoiled beauty attracted a group of English investors, the British Pacific Properties Company, which bought thousands of acres of land for $75,000. Their residential subdivision, known as the British Properties, is now one of the most exclusive neighbourhoods in Canada. To develop their lands, the Company was required to construct Lions Gate Bridge, completed in 1938, across Burrard Inlet to the City of Vancouver.

Park Royal Shopping Centre, the first shopping mall in Canada, opened in 1950. The 1960\'s saw the development of the Ambleside Apartment area when West Vancouver experienced a building boom of waterfront high-rises. Later, in 1974, the Upper Levels Highway was completed.

Today, West Vancouver's population is about 43,000. Despite this growth and its proximity to downtown Vancouver, the area still manages to retain a small town atmosphere. This community feeling shows through such popular events as Community Day, the Coho Festival, the Dundarave Hoe-Down, the Harmony Arts Festival and Horseshoe Bay Day. 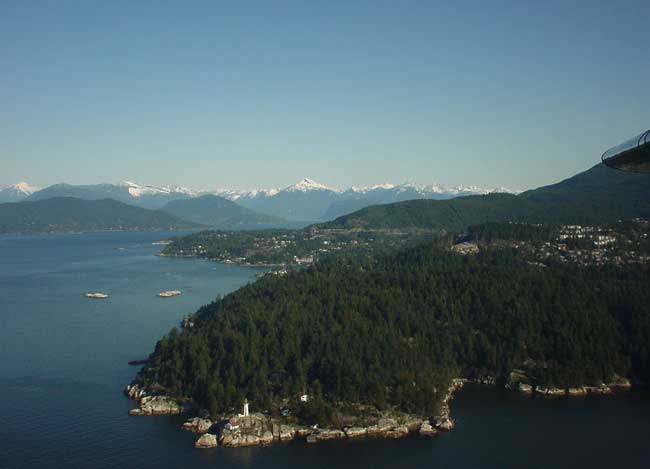